About 5 years ago in a brainstorming session, our team asked a question that has changed the way we look at our business. Most high production row cropping systems are familiar with chemical fumigation. In our backyard it's potatoes, in California, it's really any vegetable crop or strawberry production. The basic premise of fumigation is let's try to get rid of all the disease-causing organisms in the soil by saturating it with antibiotics- in this case, a chemical.

The question that was asked that day around our conference table was "Can we get the same or better results PROBIOTICALLY as the fumigation companies get ANTIBIOTICALLY?"

From there we went to work and established products and protocols that have become a viable replacement for chemical fumigants. You'll hear this referred to as Dominate or Guardian Protocol. (Dominate is our private label with Valley Ag, Guardian is our own label.)

The results over that time period are clear- We CAN grow a great crop by enhancing the soil biodiversity instead of eliminating it. One large potato processor we work with that really has its sights set on sustainability and getting potatoes off the "dirty dozen" list told us this represents an 80% reduction of chemical inputs from their grower standard. Maybe the best part is that it typically is a less expensive program than the harsh chemicals!

But enough about spuds- I wanted to share another application of these products, this time in alfalfa. Three years ago we got a call from one of our partners in Eureka Nevada about a new strain of nematode that had showed up in the valley and was causing havoc. New stands of alfalfa would come up about 4-6 inches, turn white, and die. No chemistries were labeled for this type of control, so the crop advisor called me to see if we had anything that might help.

We had recently added a new strain of a beneficial fungus to our Dominate blend that was known to be very active on nematodes. You'll see it referred to in the literature as Paecilomyces lilacinus or Purpureocillium lilacinum. I told him I'd run some down and we could try it.

We put down 5 gallons to the acres across the entire field and 10 gallons in the really bad spots. It was amazing to see how this stuff was spreading, even where they dragged the harrow from the infected field to another field it was starting to show up!

Here are the pictures showing what happened: 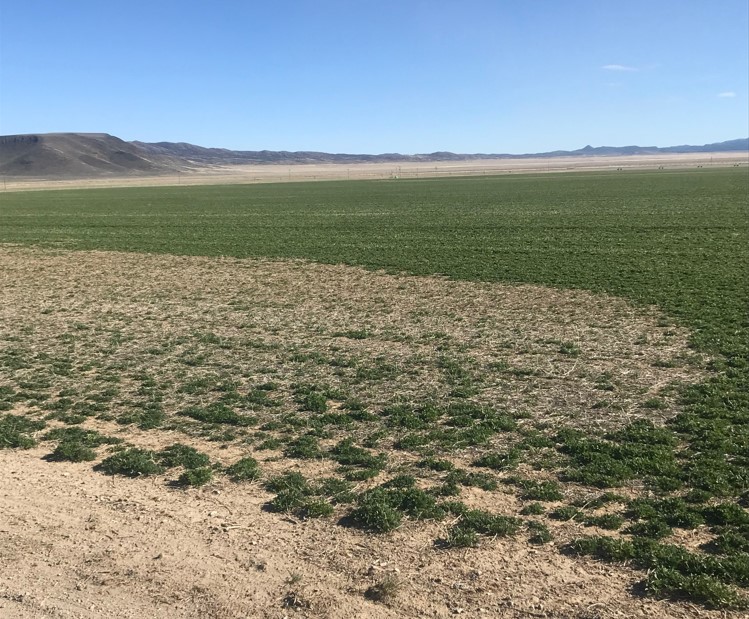 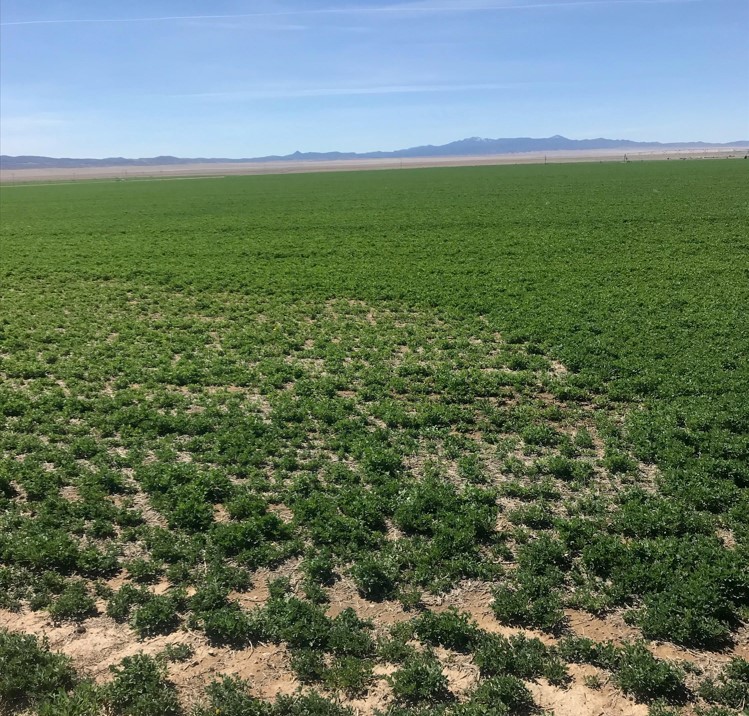 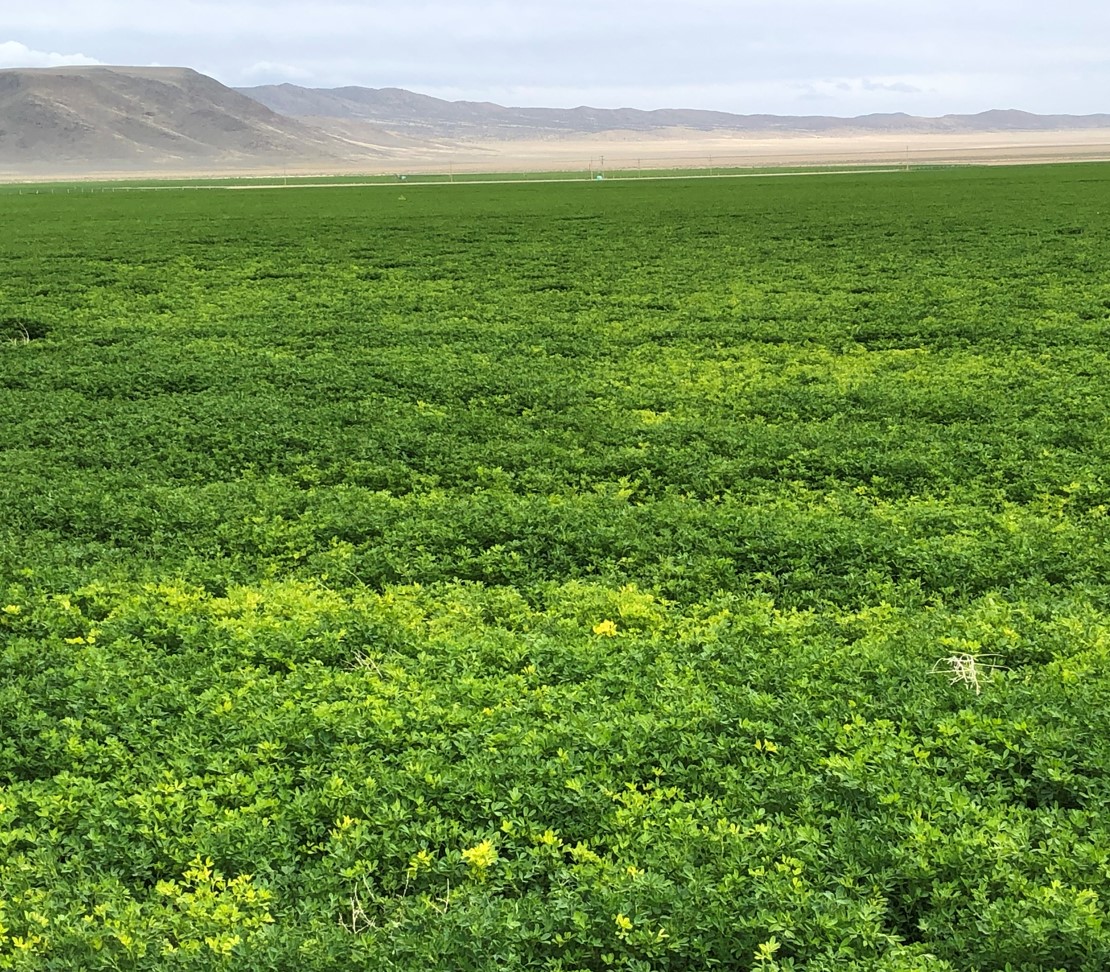 You can still see damage from where the nematode had been, no doubt, but it did save our grower from having to plow out a second-year stand of otherwise great hay, lose money on the seed, and really not have much to show for the effort. 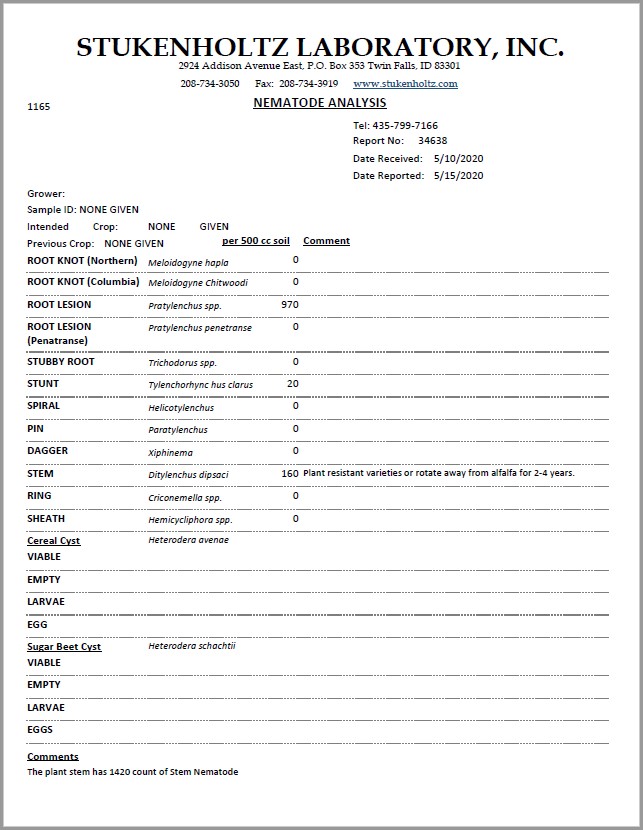 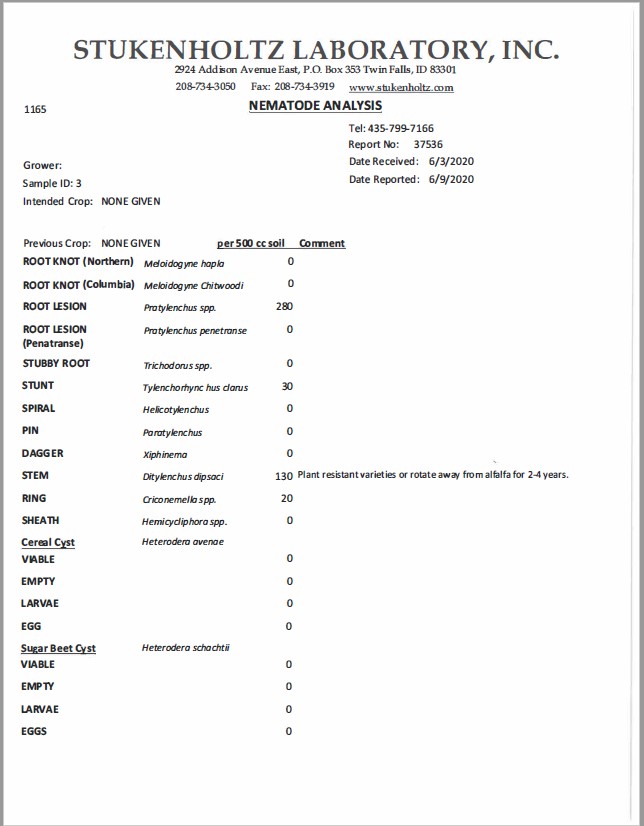 You can see in the test reports that some nematode species counts came down. We're working with a couple of labs to see whether our products are actually killing the nematode, or perhaps distracting them, etc. 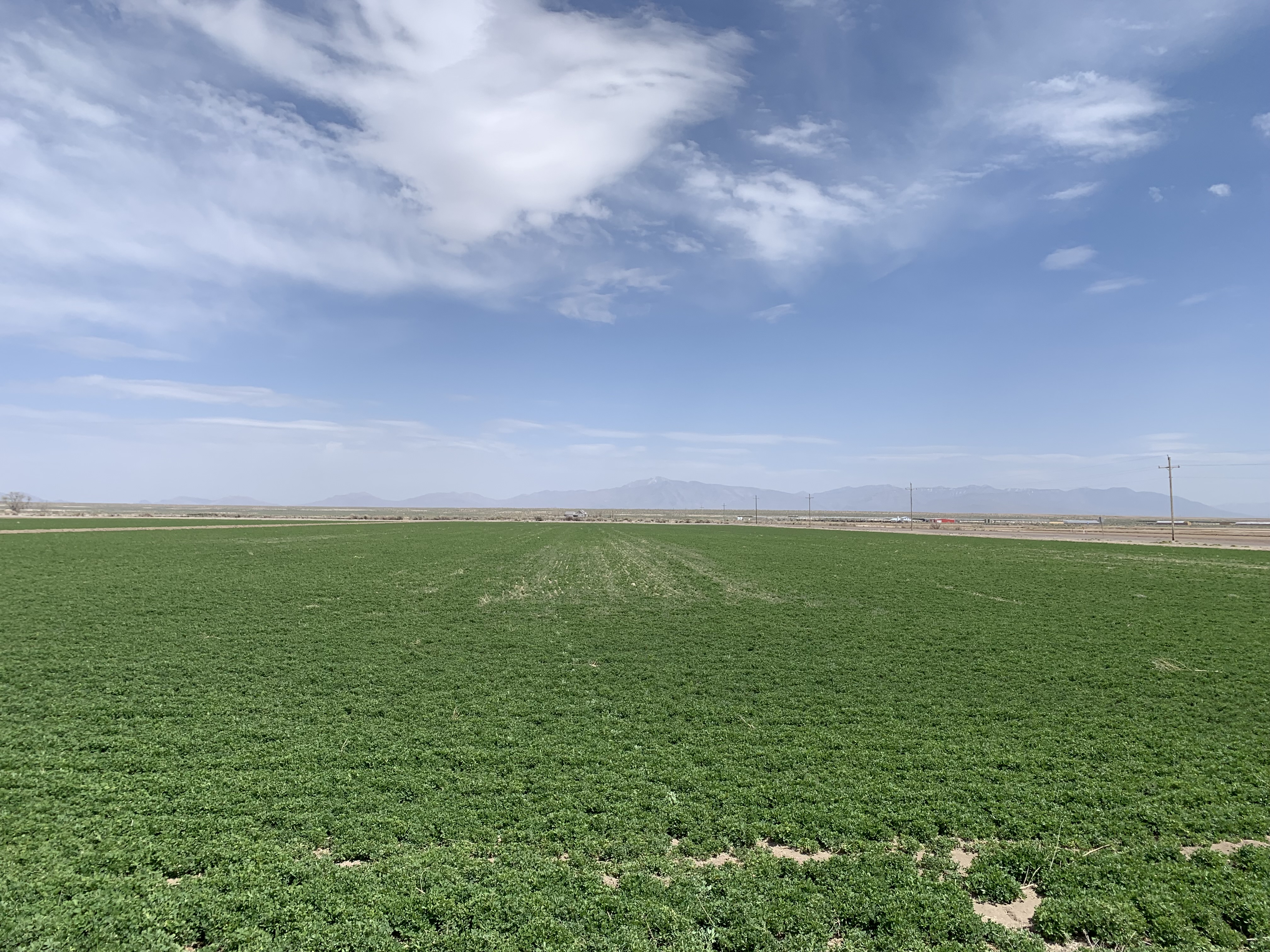 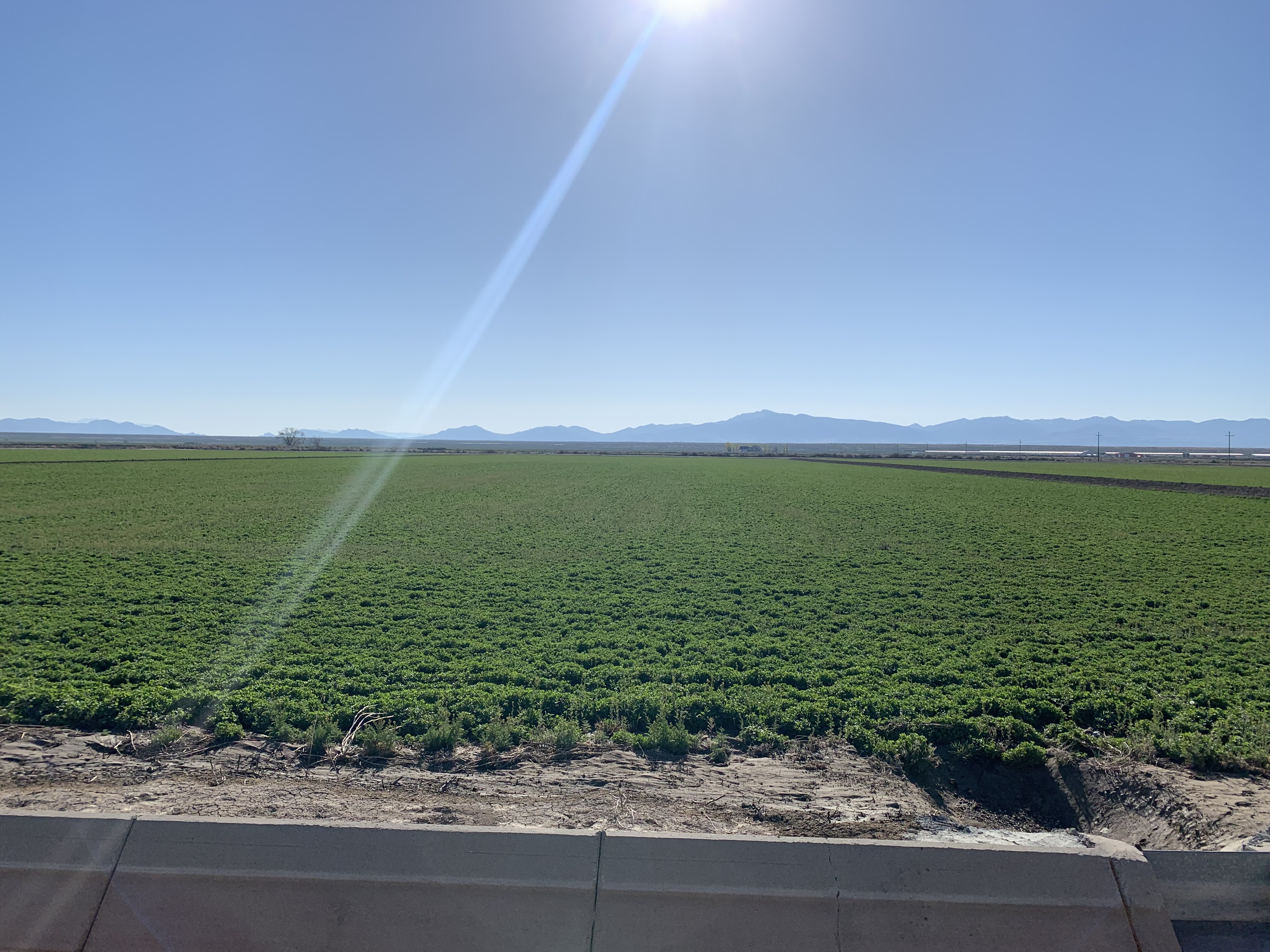 The second gallery is of a 5-gallon application from this spring the first pic was taken April 26th, and the second 10 days later. This is in Delta, Utah.

So the answer to our question seems to be a resounding yes! We can restore biodiversity to our farmed soils, restoring the natural checks and balances that existed in those virgin soils. The result? Heathier soil, great yields, and high quality- our big three here at Pharmgrade.