Pharmgrade’s suite of products are the culmination of over 30 years of research and development seeking to understand and harness the power of the biological fraction of the soil to increase crop quality and yield through the improvement of soil health. Compare a Pharmgrade label to any biological inoculant on the market today and you’ll find it distinguishes itself on two main fronts. 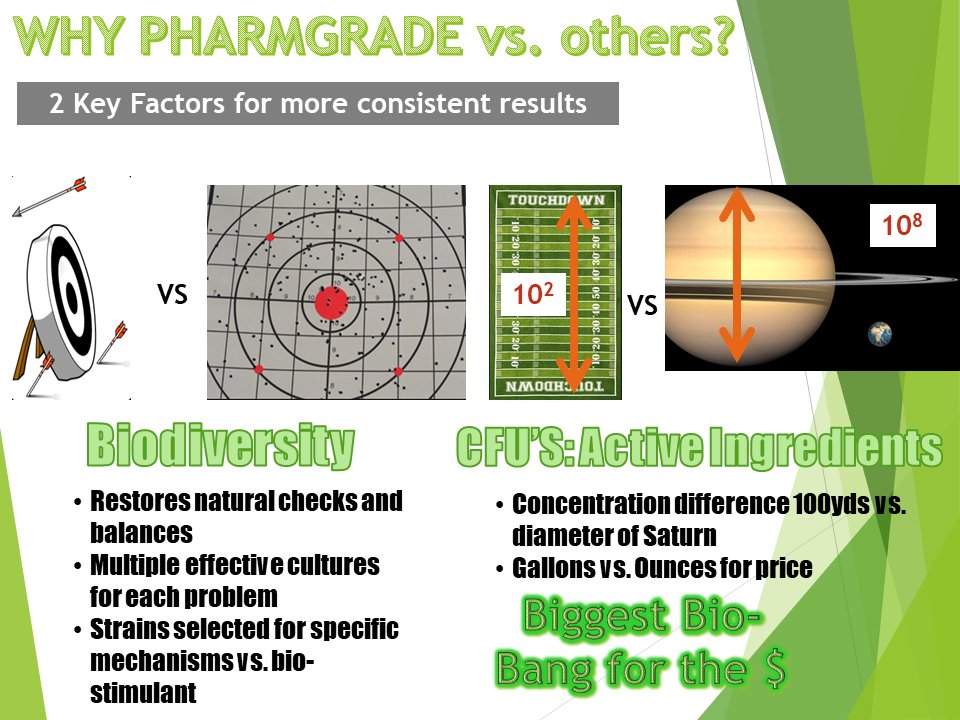 First, Pharmgrade takes a broad-spectrum approach to soil health, introducing over 20 species of known beneficial bacteria and fungi. Most products sold in this space are a single strain aimed at one specific problem or disease rather than addressing the root of the problem: lack of biodiversity in farmed soils.

The organisms in Pharmgrade products can be classified into 3 functional groups, Aerobes, Facultative Anaerobes, and Fungi. Their inclusion into our products is strategic and each strain has been vetted, trialed, and finally introduced into the mix based on its action. To have made the cut a specific organism must show improvement in one or more of the following 4 mechanisms:

Rather than go one by one through each species, let’s review what we have learned about each one of these groups, their strengths, and why we included them in our mix.

These bacteria are the ones that use oxygen to run their respiration chain, like we do. They are more efficient at this as they can use dissolved oxygen in water, much like a fish. If you look at the BIOS label, most of these belong to the Bacillus genus. Many of the competitive products on the market labeled as bio-fungicides are single strain products of Bacillus cultures. Bacillus Subtilis is marketed all around the world as a bio-fungicide. Some companies believe Bacillus Amyloliquefaciens to be more even more aggressive on certain pathogens and push it as a stronger alternative due to the natural antibiotic enzymes it produces. Others in this group are great at solubilizing phosphorus, B. Megaterium in particular. From Nitrogen fixation to biocontrol, this group is a very import part of the Pharmgrade consortium.

This is a very diverse and interesting group that CAN use oxygen to run their energy chain but can also use other compounds to generate the energy needed in the absence of oxygen. Most of these organisms belong to the lactobacillus genus. The ability to thrive either with or without oxygen is incredibly useful in the soil matrix as some areas in the field may have all the oxygen needed, while other areas are in a nearly constant flooded state. We also know that many of our crop pathogens are anaerobic in nature, so to ignore these flooded areas would be to ignore the principal source of plant disease. Fusarium, Phytophthora, Pythium, Rhizoctonia, most of the roster of disease-causing organisms love flooded soils. Much of the initial research into the group of beneficial Anaerobes comes from rice paddies in the far east and has been tested by time. There is a great literature review of this series of beneficials titled “From Yogurt to Yield” that cites 80 peer reviewed articles dedicated to showing how these versatile bacteria have evolved to help their plant partners. Some of the most interesting research being conducted today is this series’ effect on reducing abiotic plant stresses including heat, drought, and even high salt content in the soil and water.

The use of Trichoderma species to control disease is well documented throughout the world. Its direct predation of pathogens has earned it high marks in the biocontrol literature. Trichoderma wraps around pathogens much like a boa-constrictor might and secretes enzymes to break into the cell walls and membranes of its prey. The species of Trichoderma in Pharmgrade products have been selected for their aggressive action on disease causing organisms as well as covering the bases for soil temperature preference. Since our products are marketed through several different climates, this diversity is key for viability in our soils. Some prefer much warmer soil temps, while the ones isolated from the Alaskan Tundra prefer the cooler soil temps of Idaho.

The second distinguishing characteristic of Pharmgrade’s selections in the marketplace after biodiversity is the concentration or counts of those organisms guaranteed per ML of product. Our growth and stabilization technology have allowed us to pack more colony forming units (CFU’s) per ML than most any other product on the market. Add to those concentrations the fact that our solutions are priced to allow application of many gallons per acre for the same money that our competitors are getting out a quart at a much lower concentration guarantee. The key is to get enough on to make the difference big enough to be noticed. It will help at 3 gallons, 6 will show even better, but 10 leaves no doubt. Keep in mind that we have averaged $4 in return for every dollar spent on our programs for over 20 years. Not many of our competitors want to talk about ROI, but it’s how growers make decisions and how we’ve built our business.

On the back of a lot of teamwork, research, trials, and an eye for continuous improvement, Pharmgrade has positioned itself as the preeminent biological supplier on the market today with cumulative sales of over 2 million gallons. We are proud to bring this technological advancement to your fields and give you another tool in the toolbelt to help you maximize profit on your farm. We’ve always said it must work for the grower first, and he has to get the most value from the product for this to work long term. Here’s to that journey together.